If I were Trump

I’m not, in case any of you were wondering.  Not only am I not Trump, I have a zero percent chance of ever meeting him.  If I write him a letter, it will likely go into a furnace, unopened (just like the tons of other mail that presidents get).  In the unlikely event it gets opened, it will be quickly glanced at by a minion who will categorize it as “request for assistance”, Congratulations, or “FOAD”* so it can be properly counted, before going into the furnace.

But If I were Trump (or had the ear of a minion of one of his advisor’s assistants),  this is what I would do:

1.I wouldn’t even move into the White House.  I would be President from NYC, in my own building.  Maybe even do it from the palatial suite in his new DC Hotel.  Then I would have the existing White House gutted.  It has been far too long since that old building has has a top to bottom make over.  And there is no better man to create a new White House from scratch, than a real estate mogul. There would be no Lincoln bedroom with all it’s baggage from the Clinton administration, or any of that other baggage from multitudes of presidents and staffers moving into and out of offices, running new power and communication lines wherever needed.  Then, when the next president gets sworn in, he and his family will have an all new facility that is a modern home as well as a modern office and meeting environment.  And no future president’s spouse could ever again say that she wakes up in a house built by slaves (even though she would be historically inaccurate, since the White house was gutted and rebuilt in 1952, long after slavery ended) 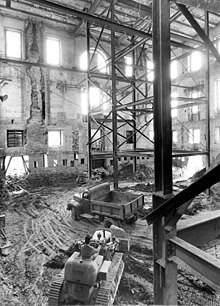 2.  I would take the example of the last president and not wait to see how much I could get away with.  I would do it all right now.  Go in, hard and fast.  Robo-sign all those executive orders repealing EVERY SINGLE EXECUTIVE order that Obama ever signed.  If Obama signed a check for the residence electric bill, I would repeal it.  I would have my staff prepare a stack of them so they are all ready to go on Day 1.

3.  I would issue an executive order to deport all illegal aliens currently in the USA or its territories.  I would give the arresting agency the authority to seize property and goods to fund their own operations (or cash bonuses for employees).  Note, this is already the law.  Congress doesn’t need to do anything to help.  The illegals would rush to the border to keep from getting their property and assets taken.  At the same time, law enforcement in every jurisdiction would stop turning a blind eye to illegals.

4.  Executive order to the Bureau of Census to distinguish between alien resident, and citizen.  Only citizens count for congressional apportionment.  POW!  Ten electoral seats evaporate from California.  Again, no laws are needed to back this.  It is just an administrative change to the laws.

5.  Fire every member of the Civil right division of the DOJ.  They have outlived their usefulness and are now in the business of oppressing the civil rights of Americans.  Open a new office in the DOJ with the charter to investigate and prosecute voter fraud.  Again, voter fraud is already against the law.

6.  Issue an executive order to hold all payments on contracts and bonuses,  arising out of the Obama administration until they can be reviewed.  There is no doubt Obama and friends will try to loot the treasury on their way out.  Trump needs to stop payment on that check.

7.  Call Putin on the Red Phone and apologize for the last administration.  Tell Putin the adults are back in charge and will try to do a better job of not burning the world down.

8.  Put a hold on all immigration.  Tell all asylum seekers, “No. Try Canada”.

These are things he can do on day one, without any Congressional or court help.

I am totally non-threatening
View all posts by No One →
This entry was posted in Politics. Bookmark the permalink.

2 Responses to If I were Trump