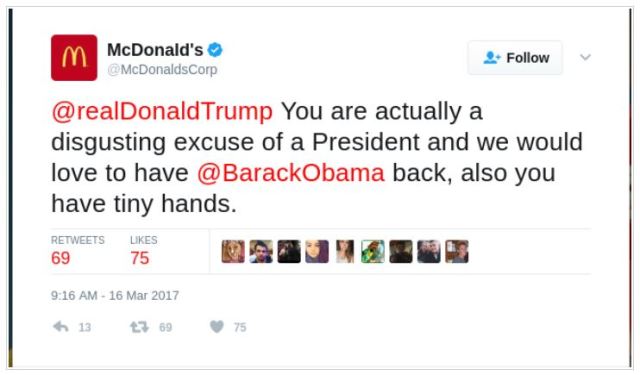 On the face of it, it feels fake.  It is just one more reason though why there is no reason for any corporation to have a Twitter account.  Nothing good can come from it.  For that matter, it is a mystery to me why any adult would have one.

I am glad to see that it was likely a hack.  I was just wondering where I am going to eat lunch today.  I normally eat at McDonald’s twice a day, EVERY day.  So, let’s look at the lunacy taking place in the comments.

Well, I didn’t need those 1500 calories from a BigMac today anyways

A Big Mac is 550 calories.  It’s posted in every McD’s. This is typical though of unreasonable bias against fast food in America and against McD’s in particular.  The attacks are not based in facts.

Five guys is also way more expensive, but it is hamburger meat not whatever the others are.

Totally untrue.  All hamburgers at all of American fast food chains are made from pure beef hamburger. Some of them went through an “Angus” phase, but it always was and still is beef.  None of the hamburger chains use fillers like oats, grains, or snouts.  As I recall, only school lunch programs resorted to that level of mass produced “burger”.  They could do it because they are the government and the kids never told their parents that the food at school was terrible.  Kids all expected that their parents knew that already and it was just part of growing up.

The McDonald’s brand is already in trouble and has bee for a few years. This won’t help.

McDonald’s corporate profits are between 6 and 7 BILLION dollars every year for the past ten years.  I am sure they will continue to “struggle” along just fine.

Kangaroo? You get meat? Last time, long ago, I ate something from there it tasted like and had the consistency of pressed cardboard.

Hyperbole much?  McD’s uses a combination of fresh and wholesome ingredients in everything they make.  The meat is real meat. The veggies are fresh. The breads are baked fresh locally.  This is true for all of the fast food chains in America.  No one serves “cardboard” or anything like it.  I totally understand people not preferring the taste, but the quality is as good as anything being served in any restaurant in America, and better than most.  This type of attack is like what we saw in the elections where one side went after Trump on purely fictional and irrational issues and people who supported Hillary still can’t let go of those issues.

I stopped by a local McDonalds to get a soft drink. I was a bit hungry and considered buying something to eat. I knew the manager. I asked her what she ate when she ate there. She replied, “Are you kidding?!? I never eat this stuff. I don’t even think of this as food.”

And that’s why she is working in a McD’s.  She is unable to identify food, even when it is laid out right in front of her.  It is real food.  Real lettuce. Real tomatoes. Real potatoes. Real bread. Real beef. Real mayo made from real eggs. Real eggs. Real sausage. Real cheese. Even the chicken products are made from real chicken meat, not feathers and necks.  Why?  Because in America, real food is dirt cheap.  There is zero financial incentive for big chains to use crappy food substitutes.

Enjoy the boycott morons. I’ll be a faithful Hardees customer from now on.

If I boycotted everyone who had a differing political opinion than mine, I would be living off the grid, wearing pants I made myself from cat hair.  Seriously.  Keeping track of all the people who have wronged me is exhausting.  Any company as large as McD’s is going to employ LOTS of people who just want to come to work and make a great product that feeds hungry people and makes them happy.  In the process, they will earn a living and pay their bills.  THAT’S Capitalism.  Being a petty little bitch about everyone agreeing with you before you buy or use their products is what the brain dead people who insist on “fair trade” coffee do.  Good luck to them.  I’m not one of them.

I am totally non-threatening
View all posts by No One →
This entry was posted in Current Events, Philosophy, Stupid. Bookmark the permalink.